In Ancient Egypt and Ancient Greece

Even the rose is used to obtain a nice fragrance, and with this

It is known that the Hanging Gardens of Babylon and the rose among the flowers grown by Amytes here.

Information on the use of rose, which is of Central Asian origin, in Turks can only be found in the 11th century in the light of sources. century can be studied.

The use of roses for fragrance is a bit outside the medical textbooks.

But 15. From a powder prepared with the scent of roses. It is mentioned in “Kemaliye”, an important medical book written in the 19th century.

Rose petals are pounded in a mortar and powdered, and after the bath, it is applied by massaging the neck while it is moist.

Thus, the rose scent does not last for a long time. The reason for its application is for the treatment of the soul.

However, we know that there is also a Gulhane in Topkapi Palace in Istanbul. This Gülhane was used as the place where roses were grown during the Ottoman period.

It is possible to see the same plan and description on the map made by Kauffer in 1776.

We know that rose water was produced from the roses grown here in the palace garden.

Rose oil, like any other, is widely used in ancient medicine. 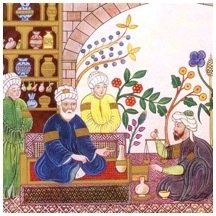 The use of rose oil in diseases originating from the brain and to strengthen memory is mentioned in Ibn Sina’s famous book “al-Kanun fi’t-Tıbb”.